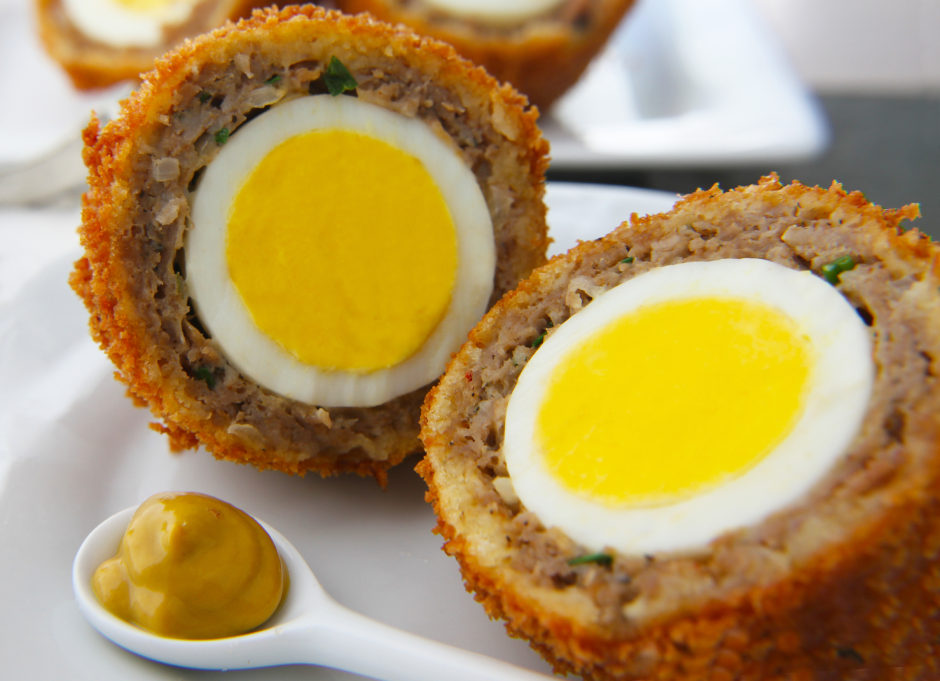 Crunchy on the outside, oozing in the middle, Scotch egg is a boiled egg wrapped in a flavourful sausage meat mixture, covered with bread crumps and deep fried until golden brown. Loved by all age groups, packed with protein power, this snack is a common dish in UK pubs and in Indian homes.

It’s undoubtedly a treat when it’s taken with sauces like ranch dressing, hot sauce or hot mustard sauce. There are regional versions to this little dish like “Manchester egg” that uses pickled egg, coated in a mixture of pork meat or black pudding. The same covered in worchestershire sauce and clad in a mixture of local sausage meat and white pudding becomes “Worchester Egg”. Scotch eggs are known by different names in different European countries like “vogelnestje” (“little bird’s nest”) in the Netherlands and Belgium; and “polpettone” in Italy, consisting of a meatloaf filled with eggs.
There are some speculations about the true origins of scotch eggs.

A claim by The London department store Fortnum & Mason argues to have invented Scotch eggs in the 18th century, which may have been inspired by the Mughlai meatball dish “nargisi kofta”. Scotch eggs seemed to have first appeared in the 1809 edition of Maria Rundell’s “A New System of Domestic Cookery”, which was served hot with gravy. Whichever story you agree to, the scotch eggs have stood the test of time or shall we say the “taste of time” and truly are the favorites for many.

Health Tip: You can save on fat and calories by baking Scotch Egg rather than deep frying.